Thank you for visiting the Ss. Cyril and Methodius Ukrainian Catholic Church website! We have been serving Catholic believers and our local community for over 125 years. We belong to the Ukrainian Catholic Archeparchy of Philadelphia. And yes, we are in full communion with the Holy See. We strive to bring the Gospel of Jesus Christ into our daily lives at home, at school and at work.

The Rev. John Wysochansky fell asleep in the Lord on Friday, Feb. 26, 2021, at Abington Manor, Clarks Summit, following an illness.

Born in Peckville on July 10, 1928, son of the late Joseph and Anelia Wysochansky, he was a graduate of St. Basil's Prep and was a Ukrainian Greek Catholic priest. After attending St. Basil's College for two years, he entered the armed forces and honorably served his country with the United States Army in Italy. After military service, he attended and graduated from the University of Scranton. He graduated from the Catholic University of America, Washington, D.C., while attending the St. Josaphat Ukrainian Catholic Seminary in Washington D.C.

He is survived by one brother, the Rev. Walter J. Wysochansky; and numerous nieces and nephews. He was preceded in death by five brothers, Stanley, Frank, Nicholas, the Rev. Constantine Wysochansky, OSBM, and the Rev. Demetrius Wysochansky, OSBM; and five sisters, Rose Poklemba, Stephanie Warner, Carol Baranik, Olga Sembrat and Mary Bukowski.

Friends may call Sunday evening, March 7, from 5 to 7 p.m. at SS. Cyril & Methodius Church, 135 River St., Olyphant, with a Parastas service at 7 p.m. A Hierarchal Divine Liturgy will be celebrated in SS. Cyril & Methodius Church by His Grace Archbishop Metropolitan Borys Gudziak of Philadelphia on Monday, March 8, at 11 a.m. Interment will follow in St. Cyril's Cemetery, Peckville.

Due to the Lenten season, in lieu of flowers, memorial contributions in Father John's name can be made to Sisters of St. Basil's, c/o Sister Joanne, for the orphans in Ukraine, 710 Fox Chase Road, Jenkintown, PA. 19046.

Guidelines for the Resumption of Public Liturgical Services

Please remember to support Ss. Cyril and Methodius Church by mailing your weekly offerings! Our parish has financial obligations that still need to be met. Due to the COVID-19 pandemic: our Liturgical Services are celebrated by the Priest only (without the participation of the faithful). Our Annual Baked Haddock Fish Dinner has been CANCELED. Your financial support of our parish is needed now more than ever.

To read the letter from our Archbishop regarding offerings, please click here.

Although we certainly welcome visits to the Parish Office during business hours, it is a courteous gesture to call ahead (570-291-4451) to be sure someone is in the office to receive you and that you will not be interrupting anyone else who may be there at the same time. 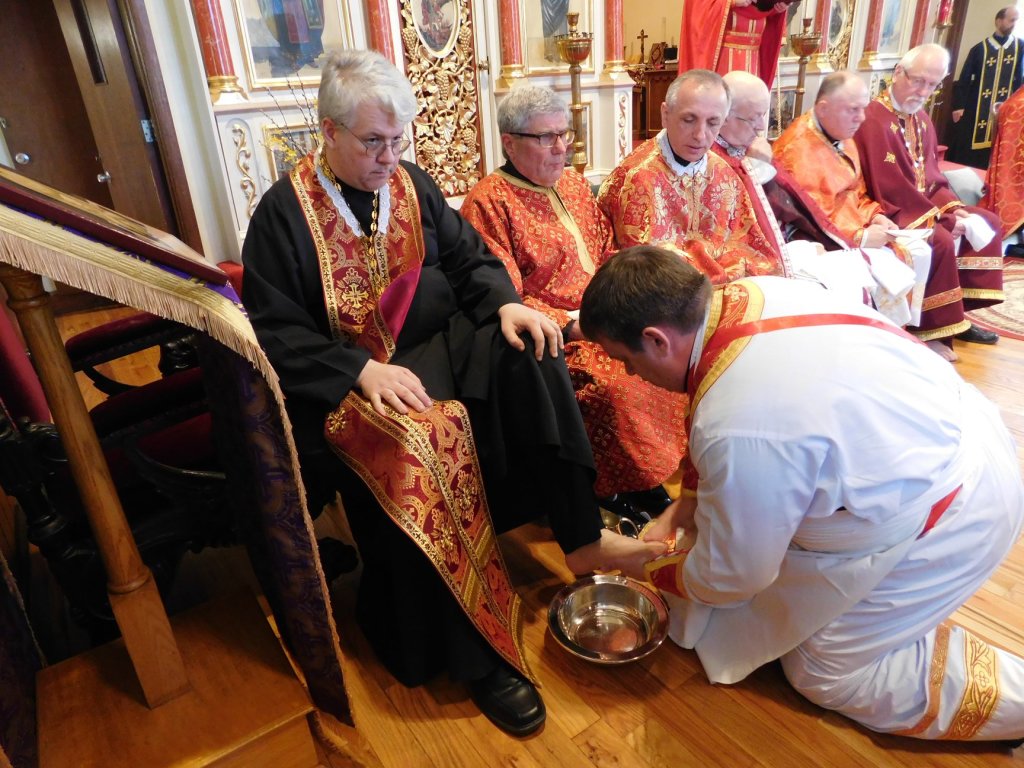 On Thursday, March 29, 2018, the Archieparchial Holy Thursday Services were held in Holy Myrrh-Bearers Ukrainian Catholic Church in Swarthmore, PA.  The YouTube video of these services can be found by clicking here.

Churches of the Ukrainian Catholic Archeparchy of Philadelphia

Click here for a "Video-Tour" of the Churches of the Ukrainian Catholic Archeparchy of Philadelphia.

Why I Come To Church

"Why I Come to Church" was produced by the Ukrainian Catholic Archeparchy of Philadelphia. This video may be viewed on YouTube by clicking this link.

The Divine Liturgies will resume on Saturday, February 27, 2021 at Ss. Cyril and Methodius Ukrainian Catholic Church. The Church has been professionally sanitized and we await the return of our Parishioners. Parishioners are reminded to properly wear a mask and keep social distancing. For those of you who are still not comfortable coming to Church during this pandemic, we invite you to watch the Divine Liturgy on this website.

Guidelines for Public Liturgical Service during the Green Phase of Reopening

Lackawanna County in Pennsylvania has entered the GREEN phase on Friday, June 26, 2020. Until further notice, on Saturdays there will be Confessions at 1 pm, with the Divine Liturgy at 3 pm. On Sundays, the Divine Liturgy will be at 10 am.

Our Archbishop has issued Guidelines for Opening Parish Churches and Resumption of Public Services on Sundays, Holy Days of Obligation and Weekdays during the GREEN phase. The Guidelines are as follows:

Please consider other precautionary measures to ensure that our churches are safe and everyone’s good health is maintained.

Memorial Services at the Cemetery

Metropolitan Archbishop Stefan Soroka of the Ukrainian Catholic Archeparchy of Philadelphia and Ukrainians in the USA attended the Divine Liturgy at 4:00 p.m on October 15, 2016 in Ss. Cyril and Methodius Ukrainian Catholic Church, Olyphant, Pa. Metropolitan Soroka was greeted at the Church doors by the youth of the Parish who were dressed in the traditional Ukrainian clothing.